Bizarro bonds – guaranteed to lose you money, and not just in a comic strip 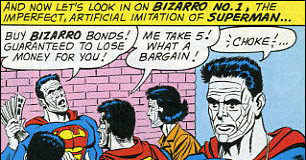 Fans of Superman – or Seinfeld – may be familiar with Bizarro World, a cubed planet far out in space that  is inhabited by imperfect duplicates of Superman, Lois Lane, and their friends. In a nutshell, on Bizarro – relative to earth – up is down, hot is cold, good is bad, and beautiful is ugly. Introduced in the early 1960s, Bizarro World has become engrained in popular culture and come to represent or mean a weirdly mutated version of just about anything. Which brings us to the bond market.

At a high level, governments and corporations issue bonds to raise funds to pay for things, which could include a new highway in Arizona or a new factory for Ford. While bonds come in all shapes and sizes, most offer the bondholder an annual or semi-annual coupon payment (think yield) and a return of principal when the bond matures. Bondholders buy bonds for all sorts of reasons, including income and portfolio diversification. History shows highly-rated sovereign bonds (both US and ex-US) are one of the few ways to mitigate downside equity market exposure. Historically though, investors didn’t purchase bonds with an eye toward losing money, but that is the Bizarro world we’re living in today. 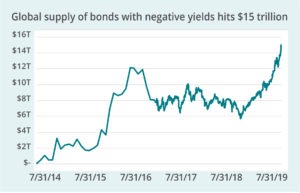 Approximately $15 trillion of ex-US sovereign bonds carry a negative yield, which means the holders of those bonds are essentially paying those governments for the right to borrow from them and anyone buying one of those bonds on the open market today and holding it until maturity is guaranteed to lose money. For those wondering how we got here, short-term factors weighing on yields include concerns over global growth driven by the US/China trade dust up and expectations the Federal Reserve will cut rates several times this year, while long-term factors include an aging global population willing to pay up for the certainty of a guaranteed return, even a negative return.

While yields could continue to move lower, we think it wouldn’t take much good news on trade or global growth to push them meaningfully higher. Indiscriminately reaching for yield today strikes us as a risky proposition.

The views expressed are those of Brinker Capital and are not intended as investment advice or recommendation. For informational purposes only. Brinker Capital, Inc., a Registered Investment Advisor.

It feels like Groundhog Day... Bill Murray, trade, tariffs, and the markets

Tim Holland, CFA, 5 months ago 2 min read
Subscribe to get
insights in your inbox
Subscribe to receive the latest insights from our experts.